I think I tried this before but have no idea where the results went to (hm, dark corners of my fridge). There are a number of receipts and I just grabbed one that seemed easy. Original recipe here (in German). It strangely asked for White Balsamic vinegar, which I did not know was a thing even, so I used ordinary Balsamic vinegar, which of course then made everything very dark.

In addition to the nasturtium seeds, it uses water, Balsamic vinegar, pepper corns, salt and bay leaf, simmered for 15 min and then bottled. The result is even darker than I expected, due to the Balsamic, so nothing much to see. Waiting 4 to 6 weeks now.

I will eventually get back to pottery but my studio is still full of junk and I cannot even get in. Never mind. Right now it is autumn and time for foraging and hording.

Now there is this dutch sweet spread called applestroop or appelstroop(?). The dutch shop sells it, but surely there must be a way of making it at home, and use up some of the apple surplus in the process — after making Apfelmus (apple sauce) and Apfelkraut (another apple spread) and apple feijoa spread and apple strawberry guava spread and apple cake and apple sauce muffins. Here are the options:

Rheinisches Apfelkraut ( more a kind of apple sirup?). The recipe uses
1litre of apple juice and boils it until it turn into sirup. That’s it.

There is quite a similar one from about.com (recipe originally here), with these ingredients:

I am not sure about the lack of molasses in both of these recipes.

Sefie then has this recipe:

Boil ingredients 1,2 and 3 until reduced to about half, then add 4 and preserve. This seems nice and easy.

KermitNZ from an NZ lifestyle block site has the following quite elaborate recipe:

First cut apples + boil with water and cider vinegar for 1hr (like, make Apfelmus with vinegar) then sieve. Then add all other ingredients and boil until reduced

The Dutch table also has a nice and simple recipe:

They recommend the use of a candy thermometer (to detect 235F~118C), which I don’t have.

Jo from SevenGreenApples used the above recipe from The Dutch Table. She also seems to have had already several trials with making applestroop (see here earlier post here, which uses the above-listed recipe adapted from about.com). She observes the missing spices in this recipe, and decides to keep making both the un-spiced and the spiced option as they are “different beasts”.

I am keen on trying the versions using molasses (not the syrup-y ones) and perhaps try some with and without the spices. Not sure about the vinegar, so will try without. The Rinse Appelstroop we bought at the Dutch shop contains concentrated sugar beet juice, concentrated apple juice, lemon juice and pectin. Overall these recipes seem quite similar to the Crab Apple Butter I have been making (here the recipe from the Mennonite Girls Can Cook site). We will now go and start experimenting and will report back later.

Too much swiss chard (silver beet)

… but the internet knew what to do. The-art-of-doing-stuff convinced me that, yes, you do need to blanche the the chard before freezing.

My problem is not so much the blanching but the cooling down in ice water. I do not keep icecubes in the house and buying some in a huge bag seems to be way too wastefull. But… the freezer compartment of the fridge had too much snow anyway and so we managed to get cold enough water.

No pictures of the silver beet forrest before the harvest, but some chard swimming in ice water and rolled up, and then packaged.

Old mistakes and new ones, too

New mistakes: there can be too much silica sand in the kiln and then everything looks like it just came home from the beach with sandy feet 🙂

And finally, I am not even sure where the mistake was made or what caused it: the clear glase did not mature AND decided to crack so badly that it can be lifted in pieces off the pots. What on earth?

Soooo…. I will dremel out the flotsam and jetsam that landed on the glaze and refire. As an aside: on the occasion of making sure of my spelling, wikipedia tells me that there is also lagan and derelict. Lagan=cargo on the bottom of the ocean that can be reclaimed, and derelict=cargo on the bottom of the ocean with no hope of reclaiming it. I am now wondering if I have flotsam and lagan on my glaze 😉

Okay, everything out of the bisque fine, nothing broken. Now just the painting and glazing and firing.

The bride keeps writing on facebook about how many sleeps to the wedding and I keep counting if there are enough hours for getting the firing done. It should all work out hopefully.

I went with deep red and lime green for the chalices and also made a small tumbler for their boy. He might so NOT be into flowers on a meadow … it cannot be helped though… at least now it is a family set 🙂

I also painted the underside of the tumber and the chalices.
There are a number of different sets, red on green, purple on green, turqoise on green. Some of the tumblers will be glazed inside, some painted (and clear-glased).

There are flowers, birds and cats. That is, each has flowers and one of the flowers is actually either a bird or a cat.

So, back to the chalices (or goblets as Diane called them). After the first disaster, I decided to go as slow as possible – while still hurrying up because the wedding is on Saturday and these are a gift.

As a silly diversion, I tried to just dip a chalice in the slip bucket, just to find out that, of course, the bucket was not deep enough and the chalice was only half-done. But a god idea, in principle. So I slipped the inside of the cups first … waited for them to dry. Then I slipped the inside of the stems …. more waiting, Then I got impatient and bunged the whole lot into the kiln for a round of drying.

In the meantime I found a large flower vase, which I re-purposed as slip container. Now at least the chalices would be able to be dipped in their complete length.

By now I really was a chicken and did not want to lose any further pieces. So I hum-ed and ha-ed and then decided to take them one by one out of the kiln, still warm from the drying, and dip them in the slip quickly. Success! Well, almost. Of course the relative quick drying caused the slip to crack a little bit at the thicker parts and joints, but most could be rubbed over and will hopefully not show up on the final piece. So, one more drying program and then into a bisque.

done – off into the bisque kiln

I am invited to a wedding next Saturday. At the engagement party I promised two chalices for the couple.

I made some last weekend from terracotta clay, and am now putting white slip on them. Dipping the whole chalice seemed to work at first but then fails during the drying as the clay gets too water-logged. The first two chalices already had their heads broken off. 😦
Back to the drawing board.

One of my pots has been featured in an etsy treasury!

Here it is (my one is in the last row to the left).

I have a shop!

Lots of things to write about, which will happen soon, promised. But, first things first: I am now proud owner of an etsy shop:

Access to my shop is always available from the top right of teh blog page and from teh side bar.

Over the next days I will upload more items. Right before Christmas a first one has already been sold. Fingers crossed that it will continue this way.

In this blog I record my experiments with clay and glazes. And cats of course. My paintings are in another blog. 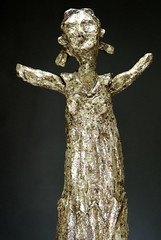 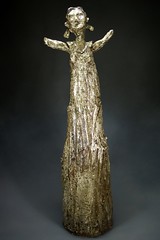 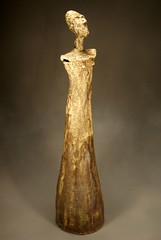 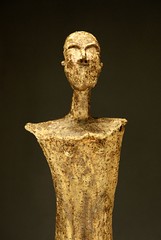 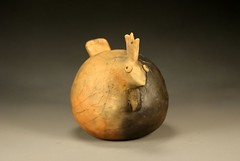